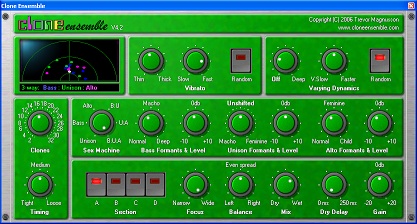 "Oh give me a clone
Of my own flesh and bone
With the Y-chromosome changed to X
And when it is grown
Then my own little clone
Will be of the opposite sex..."

There is strength in numbers

Whatever line you play or sing, Clone Ensemble will generate a room full of up to 32 of you in unison or octaves. For vocals, you can change the sex of some or all of the voices. You can dial up a classical choir, a tight jazz chorus or an incredibly realistic ADT effect.

Listen to this MP3 of of Clone Ensemble in action (202k).
In the first phrase, you'll hear a solo vocal, in the second I've added Clone Ensemble. For the final phrase I sang four harmony parts and applied Clone Ensemble separately to each. I sang the bass part an octave high, and let Clone Ensemble transpose and deepen it.
A massive 128-voice mixed (male & female) choir from four solo vocal tracks.
See the Music page for more examples.

NB: This is a 32-bit plugin. If you are using a 64-bit host app, you will need a bitbridge. I recommand jBridge.

(Cubase users: use this Mono->Stereo version if you want it to appear in the send effects list for mono tracks.)
The freeware versions are restricted so that you cannot adjust any of the settings, so you are hardwired to a single preset. A special exception to this is the Sex Machine control - you can audition all of the sex change options.

Register your copy of Clone Ensemble here,
using the secure Share-It service. As soon as your payment of $25 is processed, you'll receive an email with your registration code. Then you can start twiddling the dials.
Both the DirectX and VST versions use the same registration method - if you register one, you've automatically registered the other.
PayPal also accepted - our paypal account is here. When I recieve notification (mentioning which plugin you want to register), I will generate your unlock code and email it. By contrast this happens automatically with the MyCommerce payment processing system.

NB: When entering your registration code:
*  Use Copy/Paste, don't try to type it
*  Please include the "Curly brace" {} characters around the code.

When you register, I keep a copy of all the details you provide - name, email, address, product purchased, along with the unlock code you are sent.
This data is used for one purpose, and one purpose only: to assist you if lose that unlock code (disk crash, new computer, lost email, mists of time). Every few weeks I get an email requesting this service.
About three times (since 2001) I have sent unsolicited emails (aka spam) informing customers of new or updated products, the last time was in 2005 (I think).
This data is securely stored, and I have not (and will not ever), pass this data on to any third party.